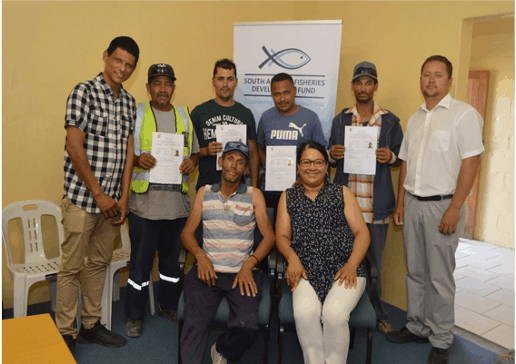 West coast rock lobster small-scale fishers in Port Nolloth, Northern Cape, have reason to smile. For they are now enjoying the fruits of their labour and can vouch for the benefits of working in a Co-operative.

The Aukotowa Fisheries Primary Co-operative was established in 2018 to serve the economic and social needs of coastal community small-scale fishers in Port Nolloth.

These mostly Khoi-San descendent small-scale fishers have for centuries suffered severe economic deprivation. Since the introduction of the Interim Relief dispensation in 2007, they have continued to suffer broadly from economically exploitive contracts drawn up by unscrupulous middlemen, live lobster processors and export marketeers.

But this has now changed. The spectacular performance by Port Nolloth’s small-scale fishers throughout the upstream and downstream value chain for west coast rock lobster since the Co-op was established, has been exceptional.

This has been achieved through the sterling hard work and combined effort of the small-scale fishers, elected office bearers and Bonga Mavume, the Chief Executive Officer of Nalitha Investments (Pty) Ltd and its subsidiary, Sentinel Fishing (Pty) Ltd.